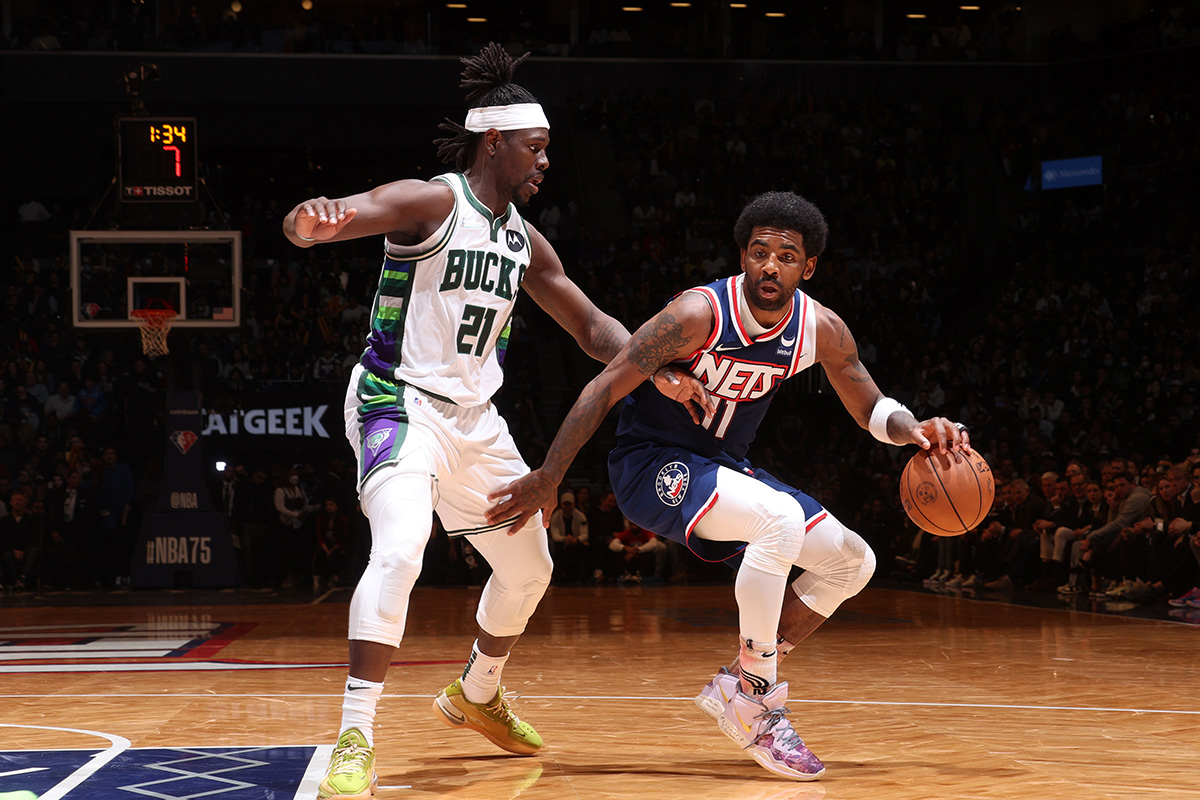 So controversial, Kyrie IRVING splits the NBA community in two, just as much as he splits opposing defenses. The guard from the Brooklyn Nets is easily one of the most skilled players in the world (round and flat) and perhaps even the greatest ball handler the Association has ever seen. When his speed, quickness and skill come together, brace yourself for unmatched moves and dribble combinations that keep you speechless and defenders flat-footed. However, Uncle Drew is more than just a fancy dribble and broken ankles along the way. He has proven to be an elite competitor and that 2016 NBA Championship to his name just adds to that fact. His three over Steph CURRY in Game 7 with less than a minute to play will definitely remain as one of the most clutch plays in NBA Finals history. Individually, the 2012 ROY is a 7-time All Star and has made All-League a total of three times. And don’t forget the 2014 MVP selections at the NBA All-Star Game and the FIBA World Cup. So is this a convincing basketball résumé or not?

Well, Nike thought so and equipped the shifty guard with his own signature shoes. Today, it is one of the more popular basketball performance lines and currently sits at seven iterations, which all feature mid cut silhouettes. Definitely good for the ones that appreciate some feedback around the ankle area. For those who want less ankle restrictions and more freedom while taking the court, Nike collaborated with IRVING to bring out a sub line that solely consists of low tops. With both of these options, the Oregon based sports giant covers many basketball needs, maybe even especially the ones of guards. Additionally a takedown line, called the Kyrie Flytrap, was added to IRVING’s sneaker portfolio to cater to the lower priced market. All in all, the whole Kyrie line is very versatile and covers many baller requirements. If you are looking for more information on the main one though, check out our review for the Kyrie 7. 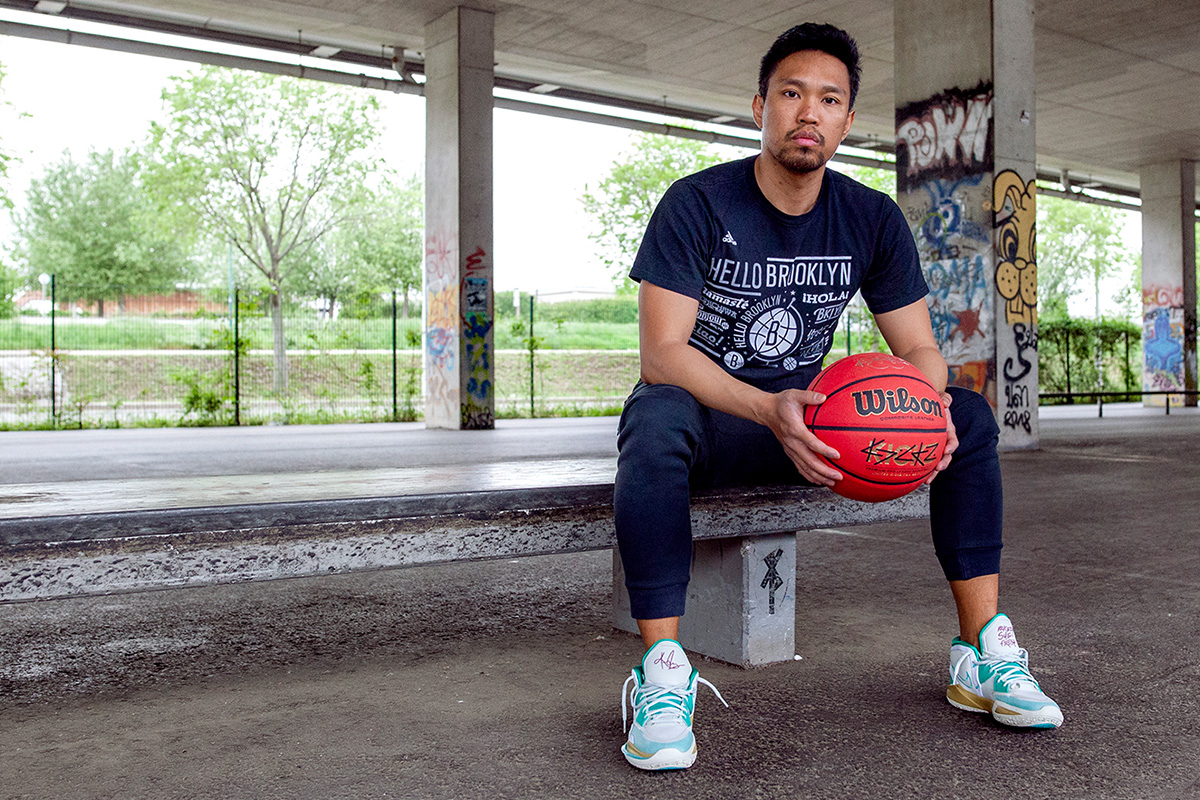 Dubbed by sneaker gurus as the Kyrie 8, the Nike Kyrie Infinity is the latest performance shoe to continue IRVING’s main signature line and looking at it, that’s really not hard to see. Of course, once again we will notice that mid top silhouette. But on top of that, you will certainly see some elements that seem very familiar from previous versions. For instance, the leather side panel from the Kyrie 6 or those wings from the Kyrie 7. So clearly a continuation of the Kyrie signature lineup in my view. The one we have in hand here is a special colorway as well. It is not a secret that Kyrie IRVING admires and considers Sue BIRD as one of the best point guards to ever do it and it is also well-known that the legendary Seattle Storm guard has a thing or two for Kyries. So this is a special homage to BIRD and IRVING’s way to #KeepSueFresh in his signature line. What should also be added from a design perspective, is the weight. With 383 g it gained some extra grams compared to the Kyrie 7 (366 g), but not too much to consider these “too heavy”. Just remember that the Kyrie 6 was even heavier than the Infinity and not even those felt too bulky on court. 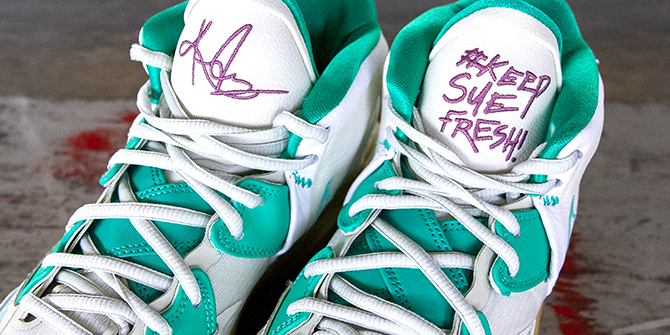 Nike went for a translucent, micro-engineered upper material, which felt pretty thin, breathable and lightweight, while remaining quite durable. That’s a good approach in my opinion. What I also liked about these were the leather panels on the sides. I definitely appreciate that premium touch, as I did on the Kyrie 6. Looking at the material selection in general and how this shoe is built up, the 6 feels and looks a lot like the blueprint for the Infinity. However this time around, everything just feels a bit nicer, softer and more comfortable in general. So a definite improvement over both direct predecessors. I really enjoyed playing in these and it may have even felt like the best material selection I have experienced on a Kyrie so far.

Breaking the outsole and its multi-directional pattern in is the key here as you may not like the traction too much in the beginning. Especially when you get accustomed to what the Kyrie line stands for (grip & cushioning). However, give them some time and they will perform better for you and give you the consistency needed when running the court. Cutting, turning or stopping will not be a concern then, while you may still wish it had that hard bite that the Kyrie 6 had. Bottom line though, the traction is solid and has you covered. Just as a side note, taking them outdoors doesn’t really seem like the best use case for these. 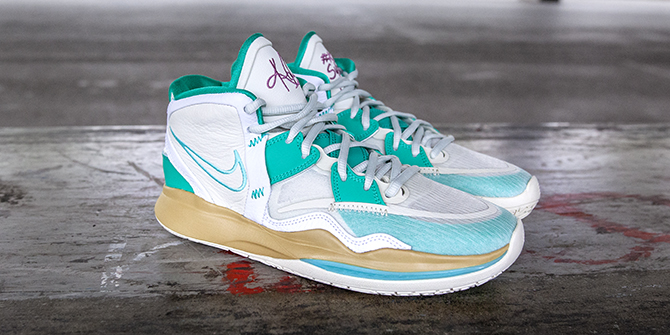 Once again, easily the best part of a Kyrie shoe. Nike describes this as “an updated 3-layer cushioning system that uses a Zoom Air unit in the forefoot sandwiched between a molded insole and soft foam”. According to the Swoosh company, less foam and fewer layers should help with improving court feel and “unlock the Zoom's energy-returning potential”. And while all of the above sounds nice, fancy or whatever, as a basketball player you will just straight up feel what’s behind it. To keep it short: this setup works fantastically. It feels soft, low to the ground and bouncy and lets you actually feel the Zoom Air unit. Definitely my favorite cushioning setup in a Kyrie so far.

Same thing as every year, as Kyries are a bit more on the snugger side. This is definitely a consistency in this line. So if you have a wider foot, go up in sizing. Half a size should do it. Personally, I went true to size and it was a good fit for me, but as usual, I needed some time to get used to them. So breaking them in was once again required but after that, the shoe felt great and very comfortable. Part of that is because of the plush padding, which gives these a really good step-in experience. 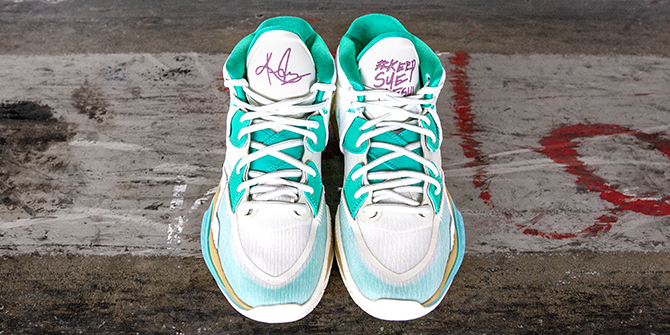 Once again, the snug fit pretty much takes care of most of the support related things here. Lockdown is great and so is lateral containment. If you want to further adjust both, the lacing system provides you with ways to do so. The heel will also stay in place because of the molding and padding in the rear area. So really no complaints in that regard. The only thing that you may miss is an outrigger or a wider base that would provide you with more stability. But this really comes down to personal preference and your playing style. I can see why adding those could be an issue for IRVING, as his shifty style gets him on the edges of the shoe quite often. 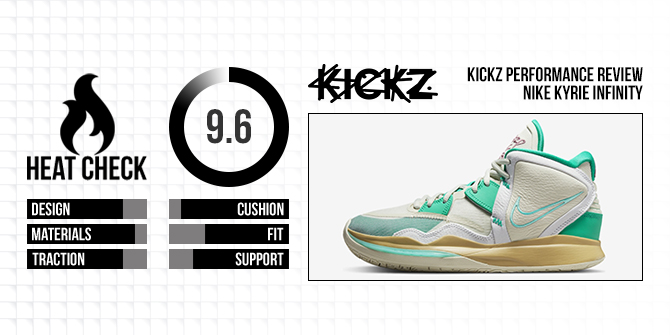 Materials, traction, cushioning, fit and support do not really show any signs of weaknesses. It is once again a very well rounded shoe, that I enjoyed playing in quite a lot. The obvious highlight is the cushioning setup, which is just a continuation of the great work done in IRVING’s main signature line. Sure, there are some features that I wished they had adopted from previous versions, like the traction on the Kyrie 6, but as said above, everything on this shoe is very solid and makes this a very convincing option at roughly EUR 130,-. Check out our selection of Kyrie Infinity performance sneakers here!

2022 WNBA Season: The Best Female Ballers On The Planet
Nothing But Net
Anfang Zurück zum Anfang